the one thing that change my life for the better is education. I fell in love with education and while I am still doing time I educate my self and my people daily. when I first got locked up I didn’t know or spoke they way I do […]

THE END RESULT WAS BEAUTY & BEAUTY IS BRITTANY, by RICO COMER

I hope all is well with the inmateblogger community! I know I haven’t submitted anything lately, as I’ve been overwhelmed with course work. Currently I am enrolled in Ashland University in pursuit of an Associates of arts degree in general studies with a minor in sociology. Last semester […]

My personal views regarding questions (a) & (b), in relation to a storied assignment in one of my Sociology classes here at Sinclair Community College, (Spring 2020 semester). Before I conducted a bit of research on this practice, I was vaguely familiar with this practice of Sati, through […]

I bet if I asked you what a retired greyhound was, the perplexed look would appear on your face. Well, retired greyhounds are actual racing dogs that were rescued from the track once they are no longer racing. I was sent to this facility back in 2010, from […]

Halfway Through, by Rico Comer

I just completed spring semester 2020 with Ashland University through j pay/lantern online classes! I was under the impression that my previous credit hours from other schools I’ve attended during my incarceration wouldn’t be transferred because so much time had lapsed, however when I received my grades I […]

The Purpose of Knowledge, by Gilbert Merritt

Why should we gain education?. What is education?.What is the purpose of education?. No one should go after knowledge with a vain motivation. If all we want out of knowledge is a good home, a decent car and a little money, than we failed to see the the […]

I’ll be expounding on the different principles of each word in terms of restoration and education,On a plane of thought of literally,historically,and figuratively.I will run both words ultimately in sync with one another to prove that how vital each is to the other and simply how we all […]

Not very often can I say that I look forward to any particular day in prison, but that changed about three months ago when I was selected as a student for a pilot program called “Inside Out.” Every Monday night for twelve weeks, I was part of a […]

How Healing Broken Circle be Helping Inmates while they are Incarcerated, by Keith Mustin

there are some many programs that an inmate can seek rehabilitation from in Marion Correctional Institution but when you are in Healing Broken Circles, you seek education, peace, and friendship all in one. one of the programs is Theatre Of Conviction which consists of Dr. Jesse Glover who […]

Second Chance Quest was founded by prisoners and family members to bring much needed light to the plights of prisoners in the United States. Mind you, the U.S. currently has the largest prison population on the planet, so it becomes quite evident that more attention needs to bear […]

“Tutoring with the Kansas Work Keys program” By Paul Stotts

For the past month, I’ve had the opportunity to volunteer for a program called “Mentouring 4 Success.” This program matches inmates getting ready for release in the next 12 months with a mentour from the community to assist with skills such as job skills, education, housing, and general […]

“It’s summer break from prison college classes. Now I’ll take up GED tutoring for the ReEntry department to stay busy and help others” By Paul Stotts

This semester of prison college has come to an end. A few more credits were earned. The English Comp 2 class was enlightening, the main thing that was taught was the proper use of ; and : and , I’ve got to admit though, I very rarely if […]

This is my second week working in the Hospice program here at Lansing max/med. security prison. It’s been an emotional rollercoaster, but mostly rewarding. My Hospice patients name is Mr. Kelly. He is 68 and serving 40 months for possession of less than one gram of meth. Nonviolent […]

Thank you for your recognition of my efforts towards the education of my mind and body. Unfortunately, the majority of my life I thought that the educated person was the one who possessed numerous college degrees and/or credentials. This ultimately led me to believe myself to be inferior […]

“Another wonderful educational class sponsored by Kansas Arts In Prison: Philosophy professor brings about 15 of her students to have class at the prison ” By Paul Stotts

On Wednesday evening for the past 5 weeks I’ve been attending a Philosophy class with an Arts In Prison volunteer that comes in to teach. He is a former Philosophy professor at a local college, however his day job is currently as an attorney. This last week, class […]

“Let me give a toast to Toastmasters International” By Paul Stotts

I want to share about a new exciting group I’ve just joined. The class is one I expect will be benificial for me now and in the future. I’m always excited to find groups that not only are offered here in the prison, but are also offered in […]

THE CHALLENGE BY MICHELLE MARTIN

TODAY IS THE SECOND MEETING OF OUR GROUP, SOMEONE TOLD ME WELL….ALL WE WILL DO IS SAY WHAT WE THINK SOMEONE WANTS TO HEAR OR MAKE OURSELFS THE VICTIMS, SO, MY FIRST QUESTION TO THE GROUP IS ARE YOU OKAY WITH BEING CALLED ON YOUR B.S.? CAN WE […]

Last week there was a one day workshop I attended that was very interesting. In my 11 years in prison I’ve never attended anything quite like this. Let me explain. “Arts In Prison” is a Kansas not for profit that sponsors all types of classes at the prisons […]

Today was a beautiful spring like day….as I enjoyed the first warm weather in some time my thoughts went to our few remaining honey bees….we did have 6 regular hives and one top bar hive but over the long winter we have lost 4 hives including the top […]

Charlie Stephens is an English teacher at Tennyson High School in Hayward, California. He recently invited me to correspond with his class. I’d like to share with you my letter to his students: Dear Mr. Stephens’ Class: My name is Sean Swain and I’m writing to you from […]

Our second debate class was different than the first. Some who missed last Sunday’s class showed up. But some left after the first hour (class is two hours). This week’s class was more informational, dealing with examples and definitions of the fallacies addressed in the materials. Class closed […]

Most of the usual suspects (“self-proclaimed” prison intellectuals) showed up for class. And unexpectedly, Denise, our class sponsor, showed up–with her student in tow. I can’t quite remember his name though. Denise is really bubbly and gung ho about debate. Her student, however, is relatively reserved but willing […]

Well, let’s just say that there were fireworks in debate class this week. Class started with some hiccups–Alex, the debate student sponsor didn’t show Atif, an inmate facilitator who had the mock debate video we were supposed to watch didn’t show, which meant no video and Perry, the […]

“Reaching Out From Within: Newsletter Editor requesting your submissions” By Paul Stotts

Reaching out from Within(ROFW) is a 501 (c)(3) not-for-profit organization. We were formally know as “Stop Violence.” Our group was founded in 1982 in the Kansas prison system. The group was heavily assisted by an amazing women named SuEllen Fried. SuEllen founded the Kansas Committee for the Prevention […]

NOTICED TO LATE by Jesse Bailey

Back in March I was suspended from FreedomTails dog program. I was moved that night. Within the next 8 days I was moved 2 different times. Since then I have had 3 different celly’s. I am now back in my original cell 6 months later and on my […]

DOG AT MY FEET

This is so cool that I have a dog again. It feels so good to see Willy laying at the foot of my bunk on his mat. Just looking at him sleeping, it puts a warm feeling in my soul. I look at the crate in he corner […] 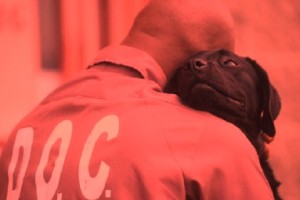 I got in the dog program in 2010. I have been around for a long time. Have had a lot of dogs, seen alot of dogs go through here and experienced some crazy stuff. There have been great times, good memories and some cool dogs. Along with some […]

THE LITTLE DOG I DIDN’T WANT I will never forget the day Fredrick became a part of my life. When dogs come in to the unit. Everyone gets excited. The dogs bring the atmosphere and mood up in the pod. People love seeing these dogs. Most of the […]

UPDATE ON THE S*HIP PROGRAM

To: My S*HIP project followers. Great news to tell you. Stafford Creek Corrections Center has agreed to pilot my project. We had a meeting today and we layed down the ground work for this awsome project. I have several staff asking how to get involved. This is the […]